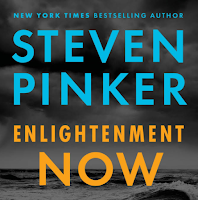 Steven Pinker’s new book tracks violence throughout history and applies it to 15 different levels of progress to paint a holistic picture of how and why the world is getting better. And despite what the media tells us, a lot of things are better now than they’ve ever been. For example:

1.     You’re 37 times less likely to be killed by a bolt of lightning than you were at the turn of the century—and that’s not because there are fewer thunderstorms today. It’s because we have better weather prediction capabilities, improved safety education, and more people living in cities.
2.    Time spent doing laundry fell from 11.5 hours a week in 1920 to an hour and a half in 2014.This might sound trivial in the grand scheme of progress. But the rise of the washing machine has improved quality of life by freeing up time for people—mostly women—to enjoy other pursuits. That time represents nearly half a day every week that could be used for everything from binge-watching Ozark or reading a book to starting a new business.
3.    You’re way less likely to die on the job. Every year, 5,000 people die from occupational accidents in the U.S. But in 1929—when our population was less than two-fifths the size it is today—20,000 people died on the job. People back then viewed deadly workplace accidents as part of the cost of doing business. Today, we know better, and we’ve engineered ways to build things without putting nearly as many lives at risk.
4.    The global average IQ score is rising by about 3 IQ points every decade. Kids’ brains are developing more fully thanks to improved nutrition and a cleaner environment. Pinker also credits more analytical thinking in and out of the classroom. Think about how many symbols you interpret every time you check your phone’s home screen or look at a subway map. Our world today encourages abstract thought from a young age, and it’s making us smarter.


5.    War is illegal. This idea seems obvious. But before the creation of the United Nations in 1945, no institution had the power to stop countries from going to war with each other. Although there have been some exceptions, the threat of international sanctions and intervention has proven to be an effective deterrent to wars between nations.
at January 29, 2018

JRobi
The Twisted Gardener is a hodgepodge collection of thoughts on gardening, physical fitness, personal finance and all things life. Disclaimer: The information contained in this blog is for entertainment purposes only and should not be viewed as recommendations or advice. I am an expert at nothing and the majority of my posts are either quotes, rambling thoughts or personal experiments resulting from my own studies and based on my age, goals and life experiences. If you desire workout, diet, gardening or personal finance advice, please consult a real expert.